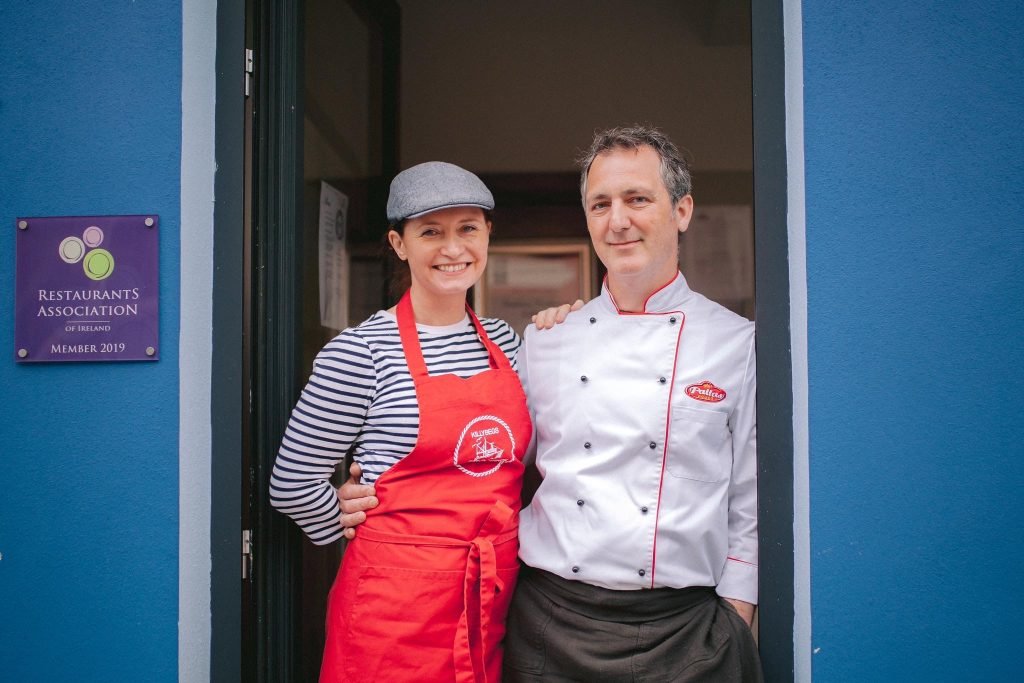 Anderson’s Boathouse Restaurant Killybegs is owned and operated by Garry & Mairead Anderson. It was opened in December 2019, following the Success of our award-winning sister business Killybegs Seafood Shack, which opens seasonally and is situated
on the Old Pier in Killybegs.

The Boathouse brings the same attention to detail and consistency to a more upmarket seafood experience whilst the restaurants interior has a casual and comfortable atmosphere. Garry along with his team, run the kitchen having worked previously for Gordon Ramsay in Claridge’s, London and Lough Eske Castle in Donegal town, Donegal’s only 5* hotel. Between them both they have over 40 years’ experience in the catering & hospitality industry.

Mairead manages the front of house, along with their Manager, and has run the Killybegs Seafood Shack since 2017. They decided to bite the bullet and open a Restaurant in their local town seeing a gap in the market.

The restaurant itself overlooks Killybegs Harbour and specialises in freshly cooked seafood dishes but also offers a variety of other options, all products are Irish and locally sourced wherever possible.

Garry’s Seafood Chowder currently holds the title for both Donegal’s best chowder 2018 and Irelands best Seafood Chowder 2019 and 2020.  The Boathouse Restaurant also holds the title for Ulster’s best newcomer for 2019, in the coveted Restaurant Awards, which is an amazing feat for such a new business. The Boathouse has featured regularly
in National Media such as The Irish Times and The Irish Independent as one of Irelands top food destinations

Free WiFi For Everyone

We aim to treat every customer as if they were a guest in our home.

Award Winning Chef Garry, a Killybegs local with over 20 years of experience; saw a need in the area for an authentic seafood restaurant. Alongside his wife, Mairéad they opened Anderson’s Boathouse Restaurant.  A beautiful Restaurant based in Irelands Premier Fishing Port, Overlooking Killybegs Harbour and Marina.

Be a Part of Our Restaurant

nterested in working alongside us at Anderson's Boathouse Restaurant? Browse our available positions and submit your application today.